Apple’s new M2 chip continues to use the same 5nm Process technology as the M1, but this is the second generation that has been enhanced from the first generation. As for the CPU, it still has 8 cores, 4 of which are High-Performance Cores and 4 of which are High-Efficiency Cores, but this time the transistor has been increased to 20 Billion (M1 has 16 Billion Transistor). With a number of key enhancements, Apple claims that the CPU on the new M2 is 18% better than the M1.

As for the GPU, on this M2 chip there is an option of 8 Cores and 10 Cores (M1 has a choice of 7 Cores or 8 Cores), so it is certain that the M2 has a better GPU than the M1, obviously the company’s new chip. This is 25% better at the same power level. But if the M2 is allowed to use the most power it needs, Apple claims that it is 35% better than the M1. The M2 GPU has a larger L2 Cache, which gives it 3.6 Teraflops capacity, compared to the previous M1’s 2.6 Teraflops. In addition to the CPU and GPU, the M2 chip also supports built-in RAM up to 24GB and has a bandwidth of up to 100Gbps, compared to the previous M1 it supports up to 16GB and has a maximum bandwidth of 68.25Gbps.

However, this difference is largely due to the M2 chip using LPDDR5 RAM, while on the previous M1 it used LPDDR4X. In the Media Engine has also been improved by Apple, in fact, M2 can support both ProRes to Encode and Decode video. The new chip also supports 8K H.264 and HEVC video formats. In addition, the M2 also gets a new generation of security chips that Apple calls Secure Enclave and will continue to feature the same 16-core Neural Engine as the M1, but with a higher processing speed of 15.8 TOPS (Trillion Operations Per Second). Only 11 TOPS, so see that M2 has 40% better Neural Engine.

However, these are just comparisons based on Apple’s display, while the actual live capabilities are just waiting to be seen. 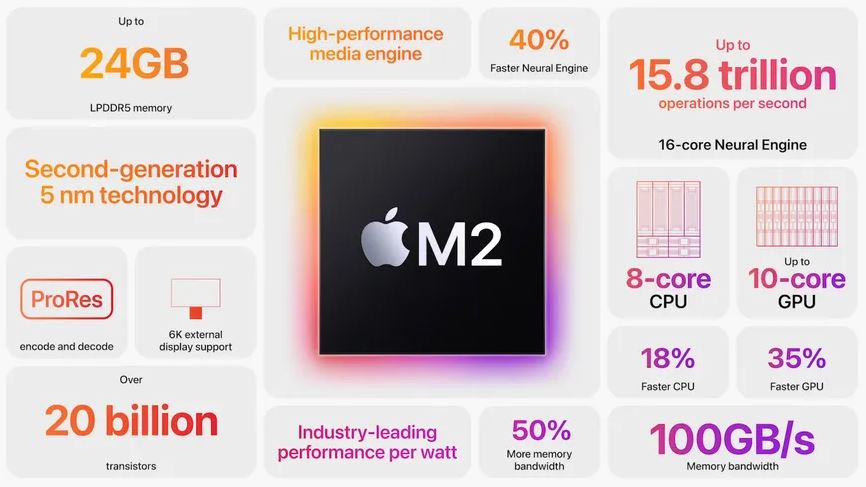