Razer’s peripherals are anything but understated, but its most recent mouse have been simplified in favor of simple, lightweight designs. For hardcore gamers, especially those who play first-person shooters, these light mice are a wonderful alternative. But that is categorically not what their brand-new Razer Basilisk v3 Pro is. It has… pretty much everything, including a ridiculously high 30K DPI sensor, RGB lights, and Qi wireless charging. It is designed to work with Razer’s new Qi dock, which connects to its Chroma software and puts your mouse on a sophisticated stand. However, the cost of all this technology is prohibitive: $159 for the device alone, or $199 when purchased with the pedestal.

Like its predecessors, the Razer Basilisk V3 Pro has a similar appearance and feel. It has the same angular shape that is typical of gaming mouse, a textured finish, a ribbed scroll wheel, a large three-headed snake emblem, a support for your thumb, and a mid-width design that is cozy in your hand regardless of your preferred grip technique. Although the mouse seems a little on the narrow side, my thumb never dragged because the thumb rest is a rather big pad.

This is definitely not a minimalist’s mouse from a design standpoint. Chroma, a lighting platform developed by Razer, is integrated into it, allowing peripherals, like this mouse, to match the lighting of the game you’re playing. The Basilisk V3 Pro includes lights on the scroll wheel, the palm rest logo, and the bottom of the mouse, which casts a faint glow on the surface it is placed on. Even I, an RGB skeptic, have to agree that this looks really nice, like the StreetGlow on one of those Fast & Furious Civics with all the bells and whistles.

The new scroll wheel from Razer, which can instantly switch between a tactile scrolling mode and a free scroll that employs virtual acceleration to scroll through lengthy papers, webpages, or anything, is the focus of the company’s marketing. It never really worked in a meaningful sense for me and seemed a little gimmicky. 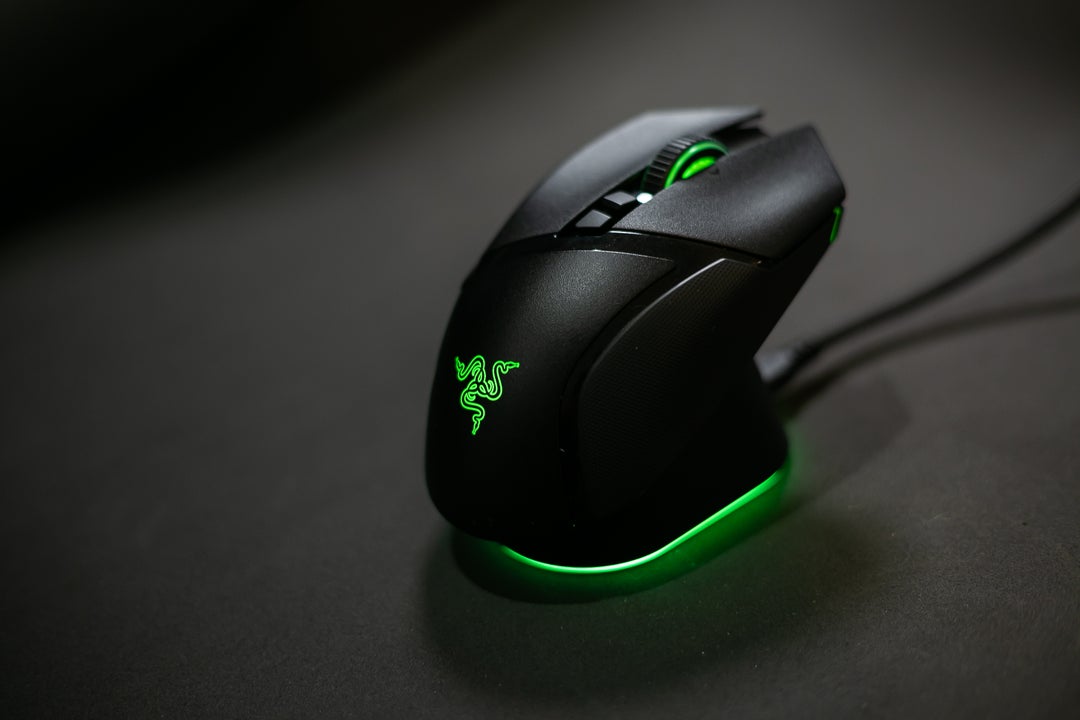 As with many other mouse configuration programs, you can modify what the scroll wheel does in Razer’s Synapse software by clicking it to the left or right. It was actually extremely helpful that I adjusted the scroll wheel side clicking to increase and reduce the volume.

The mouse may be linked through Bluetooth, Razer’s 2.4 dongle, which connects several Razer devices, or it can be tucked away under the mouse in case you lose it before you need it.

With the Razer Focus+ sensor on this mouse, you can adjust the sensitivity up to an astounding 30,000 dots per inch (DPI). Although it’s incredible that these levels of sensitivity programming are even attainable, they weren’t especially helpful in anything I attempted, and it was hard to distinguish between 15,000 and 30,000.

But the Qi charging puck that can be placed into the mouse’s base is what sets it apart most. Technically, any charger will work, but Razer offers a $80 charger with additional features that does more than simply charge your smartphone. Offering both a 4K Hz wireless transmitter and a USB Type-C connector at the front that can be used for charging and playing at the same time, it is both aesthetically beautiful and useful.