The AMD AM5 platform will be completely compatible with Corsair’s upcoming MP700 PCIe Gen 5 M.2 SSD, which has been teased by the company.

Corsair claims that development on its next MP700 SSD, which complies completely with PCIe Gen 5 standard, has already begun. The next-generation SSD will have an x4 NVMe 2.0 interface and be M.2 compliant. While Corsair hasn’t yet provided specifics about the SSD’s specs, they have provided performance data. 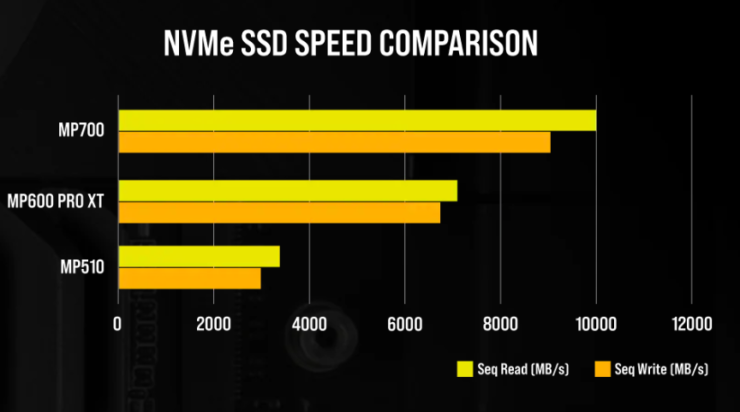 Corsair claims that the MP700 PCIe Gen 5 M.2 SSD can write at 9,500 MB/s and read at 10,000 MB/s (Sequentially). Different models will have different speeds (such as capacities). The MP700 will provide up to 64% faster read and 41% faster write rates when compared to Corsair’s fastest drive at the moment, the MP600 PRO XT.

Given that the existing drives are based on the Phison E18 controller, the high-end Gen 5 controller from Phison will undoubtedly power it. The drive will deliver about 28.5% fewer speeds than the controller is capable of at 10,000 MB/s read rates. The Gen 5 SSDs from Corsair may also fully support AMD’s Smart Access Storage (SAS) and Microsoft DirectStorage APIs. It’s noteworthy to note that the majority of Gen 5 SSD producers, including Phison itself, have picked AMD for their upcoming Gen 5 SSD solution demonstrations.

AMD has stated that it will later this month introduce its next-generation Ryzen 7000 Desktop CPUs and the corresponding AM5 platform, so we can anticipate the introduction of the company’s next-generation SSD products shortly after.