In the inaugural game of the 2022 League of Legends World Championship, the MAD Lions triumph.

The 2022 League of Legends World Championship began with MAD Lions defeating local favorite Isurus. Fans expected an explosive match to start off the tournament, but instead they got a textbook contest that lasted over 40 minutes.

Before the game began, League supporters were forced to wait close to 30 minutes. Although the exact reason for the delay is yet unknown, it was probably the same thing that caused a previous, shorter halt shortly after the beginning of the ban and selects phase. Fans were dissatisfied by the tournament’s delayed start, but their anticipation for the game increased. With just two instances, the entertainment the match gave wasn’t the most thrilling.

In the opening minute of play, MAD Lions scored an exhilarating first blood on Isurus’ support Jelly to start the game. The European team continued to increase their lead over their opponents in terms of gold and kills by immediately countering their opponents’ proactive moves like Grell’s assault of Elyoya’s jungle. When MAD Lions overstayed on their side of the map following a gank in the top lane, the Latin American team struck back. 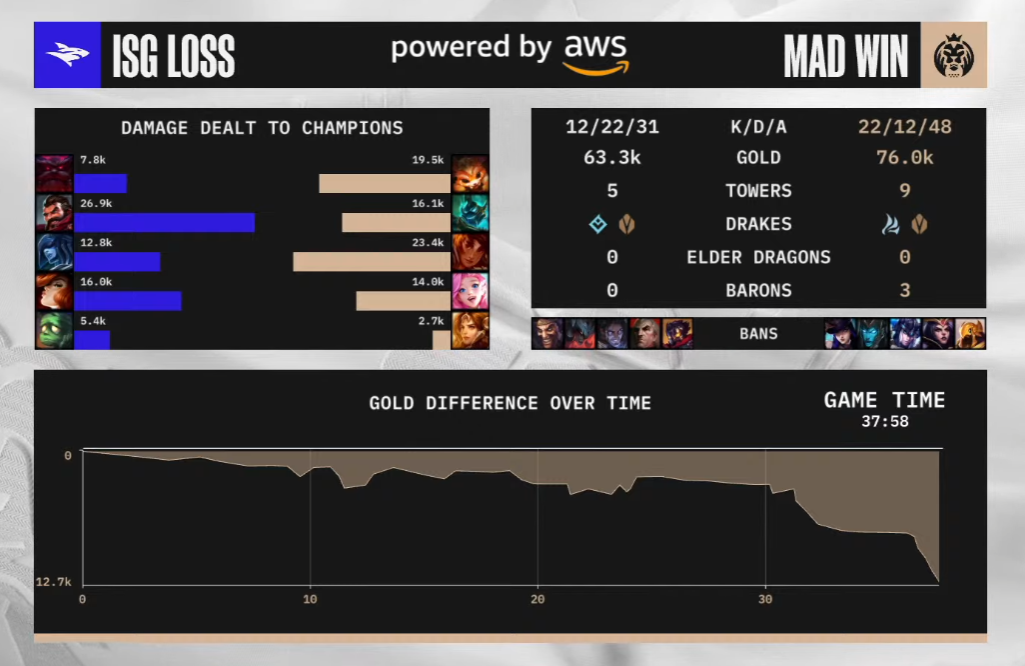 The game continued to move along slowly, with MAD Lions leading and Isurus attempting to set up circumstances that would give them the upper hand. They were successful when the first Baron spawned since they were able to crowd control and provide AOE damage while also catching and killing MAD Lions. Isurus returned to the game in a flash, bringing the Arena Esports Stadium in Mexico City to a raucous round of applause from their adoring supporters.

Even after losing the first Baron combat, MAD Lions maintained extending their advantage in the match because of their superior map vision. Isurus attempted to start a battle to gain some time to catch up with their opponents while their lanes were being pushed, but they were unsuccessful. Isurus had to protect their base’s towers from the enemy’s minions after losing their jungler to MAD Lions while their rivals slayed the second Baron of the match.

The MAD Lions eliminated the whole opposition side in a fight in front of the fourth dragon’s pit, giving the game a classic finale. They won the opening match of the Worlds by pushing through to Isurus’ Nexus while using their boosted minions, which brought the fight to a successful conclusion.

Today’s game between the MAD Lions and the DenizBank Istanbul Wildcats, who represent Turkey, is anticipated. Isurus, on the other hand, will have the opportunity to record their first victory tomorrow when they take on Saigon Buffalo Esports. On the lolesports website, league fans may watch every 2022 World Championship game and get special in-game incentives.