Review of the Thrustmaster T818 wheel base: It’s time to buckle down

The Thrustmaster T818 wheel base is a crucial component for a variety of factors.

The French-American sim racing powerhouse is a big organization in the sim racing industry. There is a good likelihood that some Thrustmaster items will be accessible if you enter any typical racing wheel store in Europe or America.

The most devoted fans of sim racing are aware that there are several businesses making excellent racing game peripherals at the mid- to high-end of the market. Direct drive, a relatively new steering wheel technology that is often only seen in high-end gadgets, has recently begun to spread throughout the industry. 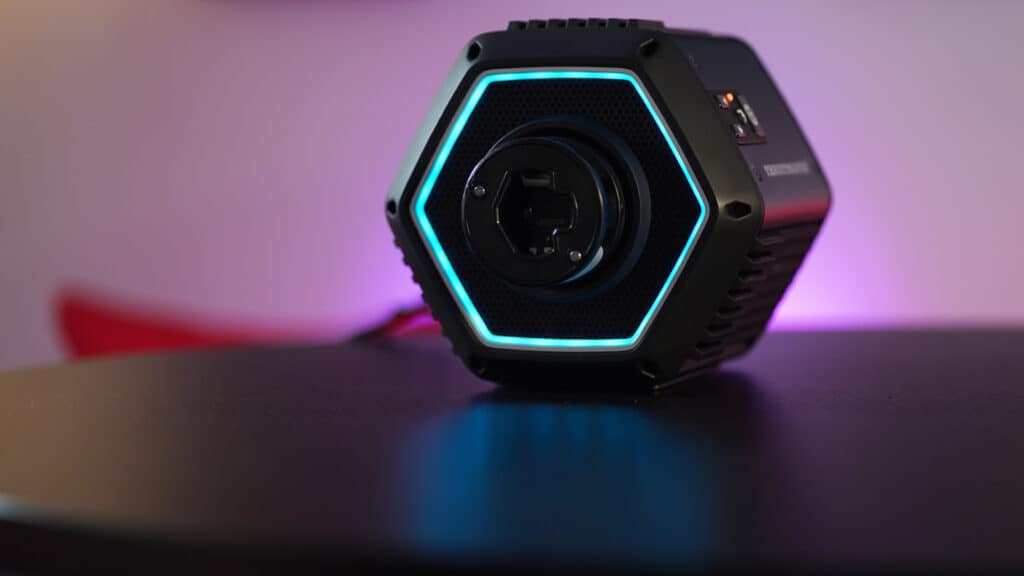 Instead of employing a more conventional system of belts or gears—the latter being Thrustmaster’s preferred approach for the past ten or so years—direct drive motors transmit the information directly to the steering shaft.

The technology offers a more pristine, accurate, powerful, and powerful virtual driving experience. Leo Bodnar, Fanatec, Simucube, Moza, VRS, Cammus, and a long list of other companies all provide direct drive systems as a consequence. Strangely, though, Logitech and Thrustmaster, two of the most well-known brands of steering wheels, weren’t listed.

Both businesses were fully aware of this before to 2022, but that situation altered. The G Pro, Logitech’s first direct drive product, was released in September. Although we truly enjoyed it, there were several drawbacks, and many people were particularly turned off by the four-figure price tag. 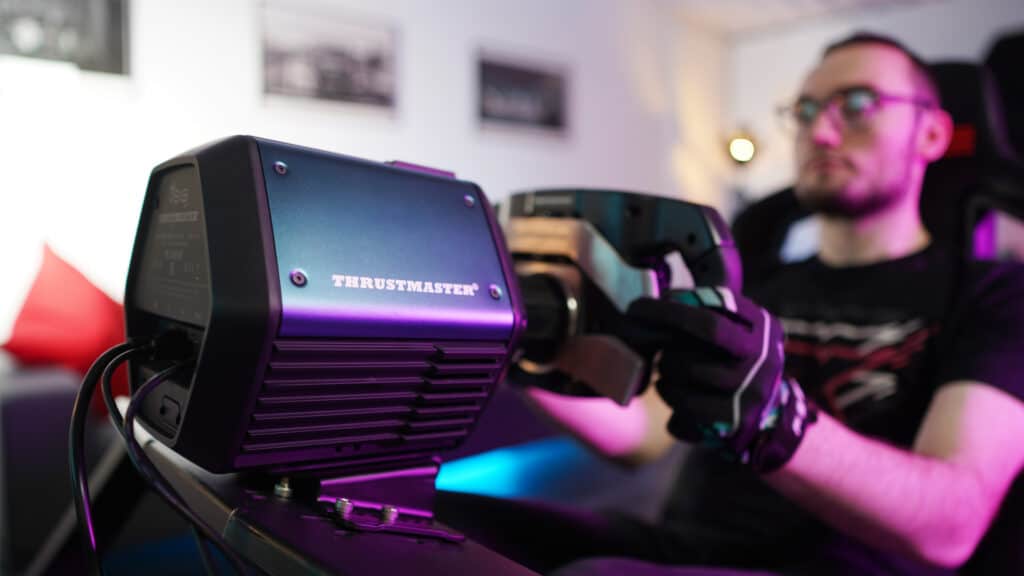 And now, just before the year is out, it’s Thrustmaster’s turn.

It recently launched the T818 and was kind enough to loan us one of the first off the production line so that we can put it through its paces.

Let me tell you straight away, this wheel base needs to be taken seriously. Very seriously.

Straight off the bat, let’s deal with what proved to be the biggest sticking point for the Logitech wheel… the cost.

The T818 base doesn’t come bundled with a steering wheel or pedals, just the base with the relevant cabling and a quick release adapter – more on that later.

If you were to compare this with Chinese upstart Moza for example, the equivalent setup with its slightly less powerful R9 base, mid-range load cell SR-P pedals, desk mounting kit and cheapest steering wheel option, it would be very similar – my calculations had it at £989 once you added the sales tax, but excluding any import duties.

Of course, you can spend less on the pedals, or more on different wheel rims for example, but that gives you an idea of where it sits. Also, if you’re already in the Thrustmaster ecosystem, your existing pedals and quick release enabled wheels will work, so you can exclude that from the cost.

That’s because, like Moza, this base is currently only compatible with PC. So no Gran Turismo 7 or any console racing yet on your T818, but the company did say that it’s exploring direct drive console options in the future.

I should also quickly mention that although the first limited wave of European pre-orders has already been and gone and a second wave is expected on Boxing Day, US customers will have to wait until March next year before ordering theirs, and in many other regions, we wait for any news at all on expected availability.  For now, this is a rare device.

WHEEL BASE DESIGN, PORTS AND BUTTONS

Let’s take a closer look at the wheel base, shall we?

A key feature of the T818 is that its produced in France. Unquestionably a bold move, and a big one for the industry, Thrustmaster has eschewed the traditional Eastern production process and stayed closer to home.

What it’s created is a hexagonal shape, with optionally interchangeable coloured plates – €29.99/$29.99 each with dark blue included – the ports on the rear, LEDs on the front and a fan at the top.

Around the back is the main power button next to the main power cord connection, a USB-C port to connect to a PC, an RJ11for any existing Thrustmaster pedals and a fourth as yet un-used port, which we assume is for future as-yet-unannounced peripheral use.

Things are more interesting on the side. Here you will find a suit with four buttons. Three of those are used to switch between different modes and functions and the fourth is a force feedback kill switch.

This is a great feature, but I must say it’s perhaps not the easiest place to get your hands to. Mind you, rather this than it not being included or as a separate box.

RGB TO THE MAX

The front of the wheel base is the most important element.

There’s an RGB LED Hex that looks very nice. You can play around with the colours displayed and in future, Thrustmaster says that any game developer can programme for it. For example, a yellow flag in a race will translate to a yellow HEX, or maybe a blue flag.

Maybe a HEX Shift light, it will be down to the individual games themselves to integrate this. For now, it adds a distinctive design flourish that can also be set to slowly transition between the available hues.

In the middle, of course, you have the metal shaft itself and Thrustmaster’s new steering wheel quick release system, which is certainly unique.

Instead of the usual pull-push or twist systems seen elsewhere, Thrustmaster has created its own unique system. The bespoke clip allows for quick and easy wheel affixation.

Simply place the steering wheel on the steering shaft and push down on the clip. To remove, simply push it up. Easy.

It also marks the beginning of a brand-new ecosystem for the company. Next year, there will be new steering wheels with this quick release system pre-installed.

For now, though, one adaptor for existing Thrustmaster wheels is included with the T818 wheel base and it will be sold separately for €34.99/$34.99.

Applying our adapter to a steering wheel for the first time took a bit of yanking and a few swear words. It is a prototype unit, however, and Thrustmaster has assured us that the final version will be easier. We recommend purchasing one adapter per Thrustmaster wheel you own.

Once you’ve attached it though, the quick release works flawlessly. We had zero compatibility across multiple wheels – SF1000, Leather 28 GT and Open Wheel – and the whole process is simple.#

MOUNTING TO A COCKPIT

Next up, it’s time to mount the new T818 wheel base to a cockpit or rig set-up.

Mounting the base directly to a rig with screws, and the hexagonal shape means that the bottom is a little narrower than most competitors, so make sure your existing set-up had the appropriate holes or be ready to drill some yourself.

Using the desk mounting kit, which provides a plate that attaches to the base’s bottom with four screws, it widens the footprint and we found it placed the M6 bolts on a Next Level Racing Wheel Stand 2.0 perfectly.

The desk kit also includes two clamps to combine with the base plate. One goes on either side, where a little catch holds them in place, and you’re good to go.

ONE FINAL THING BEFORE YOU HIT THE TRACK…

Before we head to the track, it’s worth mentioning the software, and for PC users this is identical to the existing Thurstmaster process.

Except, there are some new features when setting up the force feedback specifically for the T818.

There’s a second page with RGB light options, the force feedback power and the filter modes.

Initially, the force feedback power is locked to just 70 per cent. If you click on the padlock icon, which brings up a warning about a heightened risk of injury. If you accept that, then you can crank it all the way up and also unlocks four modes:

Those warnings may seem like overkill, but trust me, it all makes sense when you use this thing at these higher settings because this device is serious.

Now, you cannot change these modes or the feedback power the fly sadly, meaning you must close the software before starting a race. But, the on-base buttons can at least be used to alter degrees of rotation at least.

Right, now on track, and straight away the feedback is intense. This is unquestionably unlike anything Thrustmaster has ever produced. It’s visceral.

There’s always a lot of online discourse, and through marketing messages, about the newton-metres (Nm) of torque a wheel outputs, in particular when it’s direct drive.

The T818 is listed at 10Nm, which is pretty much bang in the middle of the market. There are devices with 5Nm, and those with over 20Nm.

The key element to note here, however, is that this is 10Nm constantly, not a ‘peak’ of 10Nm. Thrustmaster is also at pains to point out its ‘unfiltered’ experience, meaning that the internal parts are light, and in turn, that means they can move quickly and with more punch.

Anyway, what you need to know is that I think this jargon actually holds up as true. It really does feel like nothing else on the market, especially in the higher settings.

Direct drive is always communicative, but this is instant, detailed and offers a fluency not found elsewhere. With every little bump or divert in a track, your wrists will suffer impacts. It takes things one stp further.

This is not a toy. The warnings are serious and the age rating of 21 and over makes complete sense. And they are all absolutely worth it.

It proves that the torque figures don’t really matter, somehow this feels greater than 10Nm is is more powerful than the sum of its parts.

There’s no noise at all, despite the fan system. Never during my testing did I feel any heat either. I did, however, nearly hurt my hands a couple of times with the instant and brutal nature of the feedback. Especially during low-speed cornering and a traction loss of acceleration out of hairpins.

The Thrustmaster T818 wheel base is a new yardstick for all mid-level direct driver wheel bases, and a high-water mark for the company.

It’s a deadly serious, pro-esports-level, device. Its feedback is unique and that has to be applauded. It’s a case of better late than never, and we are glad they made it at last.

We can’t help but notice that now the rest of the company’s ecosystem now needs refreshing to match our lofty expectations. Yes, the SF100 wheel is a perfect match, but its other steering wheels and pedals now aren’t quite up to the precedent set by the T818 – although you can use other brands’ pedals.

Well done Thrustmaster, you have truly entered the game and delivered something fresh in a crowded market. Now, let’s see some new top-level pedals and steering wheels to match the savageness of this base.