Although Intel has not yet announced a release date for its new Arc A-series desktop graphics cards, the company has released information on the future GPUs. Unfortunately, the A-series’ naming practices are not as clear-cut as its CPUs. The A380, A580, A750, and A770 are the four cards that will ultimately be offered and are each targeted at a particular level of gaming or artistic use.

With 24 processor cores, 8GB of VRAM, and a memory clock speed of 1700MHz, the midrange choice, the A580, significantly raises the bar. On paper, the A580 most closely resembles the RTX 3070 from Nvidia.

The A750 and A770 are two further premium graphics cards that Intel is providing. The A750 contains 28 processor cores, 8GB of VRAM, and a 2050MHz clock speed. The closest comparable that is currently available is the Radeon RX 6600XT.

The A770 will be offered in versions with 32 processing cores, 8GB or 16GB of VRAM, with a 2100MHz clock speed. The Radeon RX 6900XT is the closest alternative to this graphics card’s 16GB variant that is currently available off of shop shelves.

Naturally, none of these comparisons are indicative of actual performance because they are all based only on the specifications provided by the individual makers of these graphics cards. 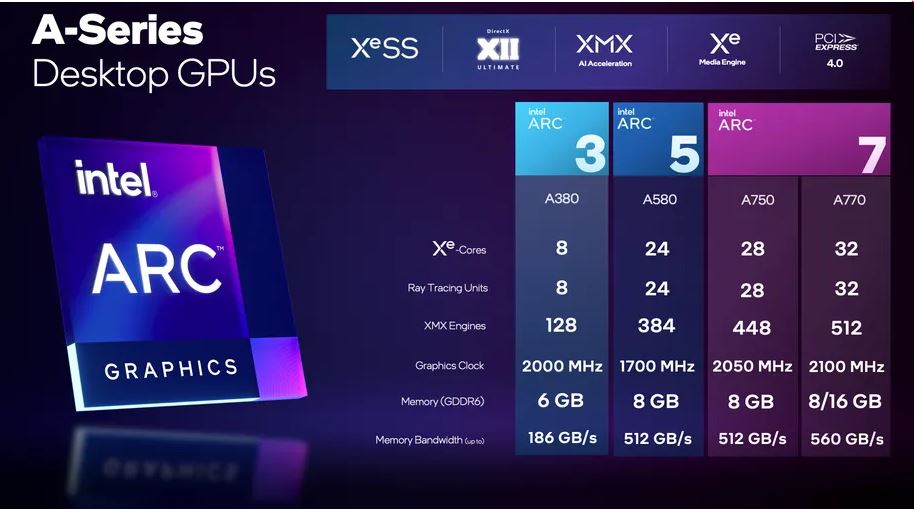