Apple has also announced the new Mac Studio, a hybrid of the Mac Mini and Mac Pro, as it is larger than the Mac Mini with higher Mac Pro capabilities.

Its screen size is the same as the Mac Mini, but it is higher at 9.40cm, with such a height, Apple claims that users can put it under many monitors without intelligence. The core of Mac Studio is that it has a chip option up to the M1 Ultra, a new chip that Apple announced at last night’s event. With this new chip, Apple claims that Mac Studio is faster than most high-end Mac Pro models currently on sale, and still maintains good sound quality despite heavy workloads.

On the back, Mac Studio is equipped with four Thunderbolt 4 ports along with 10Gb Ethernet ports, two USB-A ports, one HDMI port and a headphone jack. On the front, it comes with two USB-C ports (10Gbps for M1 Max models and 40Gbps / Thunderbolt 4 for M1 Ultra models) along with an SD Card slot.

The new Mac Studio can support up to 4 Pro Display XDR monitors with one 4K TV, meaning it can connect to up to 5 monitors at a time. 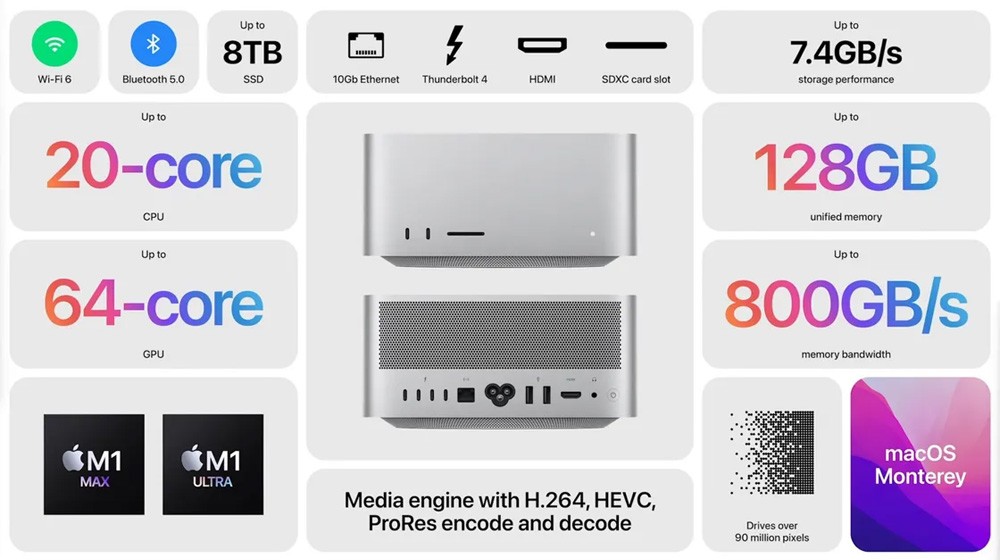 For key features, the M1 Ultra has a 20-Core CPU, with 16-Core High-performance and 4-Core Efficiency to save power. At the same time, it has a 64-Core GPU and a 32-Core Neural Engine.