The world’s first single monitor with a dual ultra-high definition resolution display is being unveiled by Samsung to start off the CES week in a major way. That would be the brand-new Odyssey Neo G95NC, a small LED monitor with a 57-inch screen (you might need a wider desk for this thing!) and an 8K resolution (7680×2160) and 32:9 aspect ratio.

The biggest gaming monitor made by Samsung to date. It surpasses the company’s 55-inch Odyssey Ark and a number of earlier models from its Odyssey Neo G9 series, the most current (before to today) of which was a 49-inch monitor with a similar micro LED backlighting.

The main benefit of small LED over standard LED or OLED, as we’ve already discussed, is that it generally becomes considerably brighter. Although it falls short of OLED in this area (as well as in terms of contrast ratio and OLED’s deep blacks), micro LED technology significantly outperforms regular LED backlighting when used in conjunction with full-array local dimming (FALD). 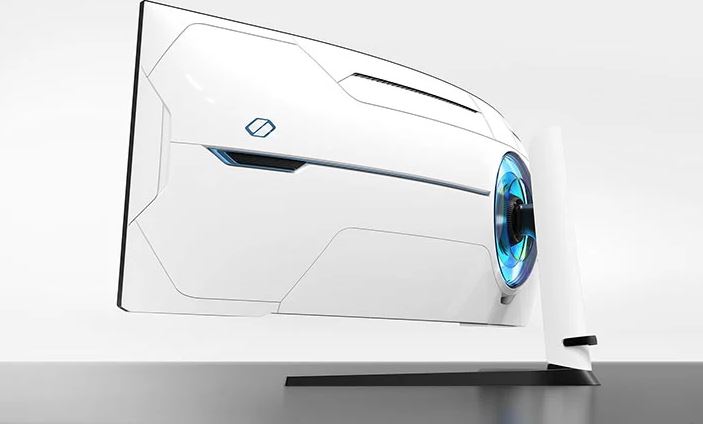 Currently, Samsung is keeping some information under lock and key, like the precise brightness of this enormous panel and the number of local dimming zones it must accommodate. It did, however, show that it had a 240Hz native refresh rate.

The catch is that playing games at 8K resolution is still out of reach for the majority of consumers, let alone utilizing a 240Hz refresh rate at that level. However, it’s not impossible—a GeForce RTX 4090 can play some games at 8K rather effectively, especially when combined with DLSS 3.

There is also the potential for future-proofing, if that is even a possibility. It’s safe to assume that a lot of people use their monitors for a very long period, and screens like this one prepare users for next GPU launches (come on the GeForce RTX 8090 Ti!). In connection with this, Samsung is keen to note that this is also the first monitor in the world to support DisplayPort 2.1.

There you have it, then. Samsung has been mum on both availability and cost. As a point of comparison, the 55-inch Odyssey Ark originally retailed for $3,499.99 and is currently available on Amazon for $2,799.99.

With the Odyssey OLED G95SC, Samsung also upgraded the Odyssey G9 lineup’s 49-inch model. This model switches to OLED from tiny LED, as indicated by the model name and the image above, and makes the claim that quantum dot technology would provide “brighter er whites, deeper blacks, and almost unlimited color contrast.”

According to Samsung, the OLED screen individually illuminates each pixel and does not rely on a backlight, which enables a dynamic contrast ratio of 1,000,000:1 and delivers real RGB and true black without the use of color filters.

In essence, that is how OLED technology operates, as opposed to having special features of the Odyssey OLED G9. The answers to the queries of how bright it gets and how it compares to the 57-inch Odyssey Neo G9 will have to wait until tomorrow.

Samsung is promoting the same 240Hz refresh rate on this display as well as a notional 0.1ms reaction time at a dual quad-HD resolution (5120×1440), which is less demanding than 8K and also has a 32:9 aspect ratio.

On the pricing or availability of this one, too, there is no information.

Finally, Samsung showcased a few displays aimed at both the general public and content providers. The first is the 27-inch, 5K ViewFinity S9 (model S90PC), which is a display (5120×2880). The color accuracy is Samsung’s key selling feature for this model; the company promises a built-in color calibration engine and 99 percent coverage of the DCI-P3 color space. Additionally, it features Thunderbolt 4 and USB-C connection.

A 27-inch edition of Samsung’s Smart Monitor M8 series is the other addition (model M80C). The 27-inch model, like its larger 32-inch brother, has a 4K resolution and allows you to connect compatible smart devices via the SmartThings hub that is already there (including lights, cameras, doorbells, locks, thermostats, and so forth).